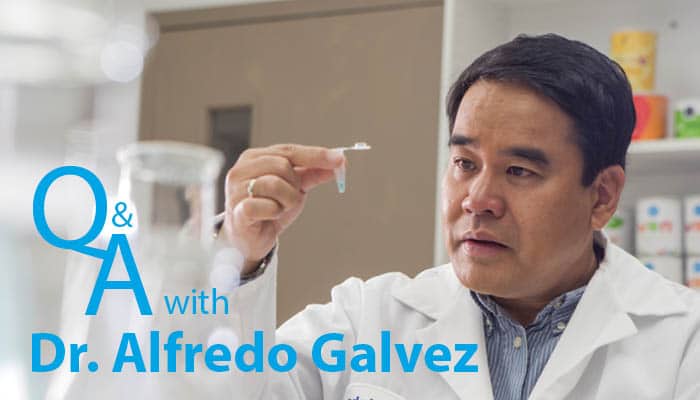 You’ve got LunaRich® questions, Dr. Galvez has answers. Below are his responses to some of your most common inquiries.

Dr. Alfredo Galvez is a renowned research scientist at the Center of Excellence in Nutritional Genomics at UC Davis and lead scientific advisor at SL Technologies, a Reliv subsidiary. Dr. Galvez first discovered lunasin in 1996 during research at UC Berkley to improve the nutritional profile of soy protein.

How does lunasin know which genes to turn on and off?

The lunasin peptide and its functional homologs in other seeds are found naturally only in the storage cells of developing seeds. Lunasin binds to specific histones (packaging material of DNA), allowing the storage cells to replicate its DNA without undergoing cell division. In the process the storage cells enlarge and, after repeated cycles, grow big enough to store the carbohydrates, proteins and other nutrients needed by the plant embryo to germinate and grow into a seedling. This functional role of lunasin in seed development is conserved in nature.

For tens of thousands of years of human evolution, seed proteins have been the major source of protein and nourishment of humans foraging for plants and cultivating crops for food. My working hypothesis is that lunasin, with its histone-binding properties, has co-evolved with the human genome to optimize the epigenetic regulation of genes important for human fitness and survival. This proposed model of adaptive evolution through epigenetic control of gene regulation provides an explanation as to why lunasin has targeted and highly coordinated effects on gene expression to improve health and to provide protection from adverse environmental conditions.

In other words, lunasin exists in nature and provide health benefits for a reason and NOT by chance. And always remember that before there were drugs, there was food.

There are other nutrients that also work at the epigenetic level. What do we mean when we say lunasin is the first nutritional compound identified to do so?

Other food nutrients identified that work at the epigenetic level include resveratrol from red grapes/wine, sulforaphanes from cruciferous vegetables like broccoli, and EGCG from green tea, among others. The epigenetic mechanism of action of lunasin was first described in 1998 to explain how lunasin can inhibit gene expression of unhealthy genes. A patent disclosure filed by UC Berkeley in 1998 was published in 2001. The epigenetic mechanism of action for these other food nutrients were described and published after 2001, making lunasin the first nutritional ingredient identified to work at the epigenetic level.

What is research showing about our ability to pass epigenetic traits on to our children?

Ongoing research seeks to prove that epigenetic marks laid down in a person’s lifetime can be passed on to subsequent generations in a process called transgenerational inheritance. This phenomenon has already been observed in plants and lower forms of animals such as fruit flies, nematodes and mice through the process of paramutation and genomic imprinting.  Research is also seeking to better define epigenetic “windows of opportunity” with regards to transgenerational inheritance of epigenetic marks, including key developmental phases such as pre-conception, pregnancy, infancy and adolescence.

Can people with a soy allergy take LunaRich X™?

Studies done in Europe on people with soy allergies have shown that the soy albumin fraction in which lunasin is found does not cause allergic reactions. However, we cannot generalize for all soy allergy sufferers, so caution should still be practiced when taking LunaRich X. A quick way to determine if one is allergic to LunaRich X is to put a small portion under the tongue and monitor for any allergic reaction such as itching and swelling. As always, we recommend you consult your physician if you have any history of food allergies before you start any supplement regimen.

We know from wonderful stories that Reliv LunaRich products provide results at any age, but why does Reliv nutrition and LunaRich become even more important as our bodies age?

The sooner people consume high-quality nutrition like Reliv, the better. But it’s never too late. The epigenome changes as a person grows older and gets exposed to different environments and lifestyles. Some of these epigenetic changes may lead to predisposition to serious health problems. Reliv nutrition and LunaRich can help in preventing and even reversing some of these aberrant epigenetic marks and protect cells from further damage as our bodies age.

Why can’t I just eat soy beans (edamame), tofu, soy milk, and other soy products to get my lunasin? Why do I need your products? What’s the difference?

Thank you Reliv for this insightful interview with Dr. Galvez